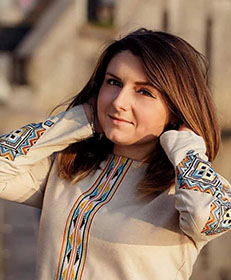 For five years, she was engaged in the process of returning her husband, military serviceman Bohdan Pantiushenko, from captivity, and was a member of the NGO Release from captivity. This experience helps in working with families of prisoners of war. She believes that during the war it is important to be useful to the country.

According to her diploma, she is a philologist of foreign languages. She used to work as an education manager abroad. In her spare time, she tries to fill her life with joyful emotions, and she’s engaged in self-development.